On 28th September the regional governments of Flanders and North-Rhine Westphalia, and the state government of the Netherlands proudly presented the outcomes of their efforts to build a trilateral approach for improving the cross-border conditions for the chemical industry.

On this occasion, EU representatives and private-sector stakeholders reflected on the opportunities that the Trilateral Strategy presents for the industry and for the regions. ECRN Secretariat attended the event and listened with great interest what are the future possibilities for interregional collaborations among three of its members. 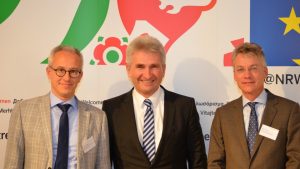 The event gathered panellists from different backgrounds. The symposium featured the participation of the Secretary General of the Ministry of Economic Affairs of the Netherlands, Mr. Marteen Camps, Secretary General of the Ministry of Economy, Science and Innovation of Flanders, Mr. Johan Hanssens and and the Minister for Economic Affairs, Innovation, Digitalization and Energy of the State of North Rhine-Westphalia, Prof. Dr. Andreas Pinkwart; together with members of the industry and representatives from the research field such as Mr Bert Kip (Brightlands Chemelot Campus); and the Commission – Dr Luisa Prista, Head of Unit Chemicals, from DG GROW.

The so-called “Vision 2030” is a long-term approach gathering together governments, academics, and members of the industry, in order to improve the cooperation with all the stakeholders, and strengthen the regional capacity of the chemical industry. The strategy is composed of 21 measures falling within three pillars: research and innovation, energy and feedstock, chemical industry infrastructures. Mr. Maarten Camps highlighted the importance of discussions on CO2, and described both digitalization and climate change as vectors of the transition. Furthermore, he stated the need for the industry to anticipate and adapt to new trends. In this light, he expressed his hope that R&I would be a priority for national and regional governments. “Chemicals can bring innovative results. We need to join forces, and cooperate for new applications”.

Mr. Johan Hanssens focused on decarbonisation, the transition to circular economy, and the digitalization. He presented the 4 strategic objectives, among which EU climate and energy policy, Circular Economy and Raw Materials. He stressed that the European Commission’s Industrial Policy Strategy is focused on the industrial transformation, where sustainability and digitalization are key factors. The EU Industrial policy puts industry and re-industrialization back on the political agenda. Prof. Andreas Pinkwart expressed the key message that “it is good to have a common approach, but we need more concrete commitments.” 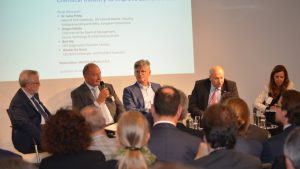 The speakers agreed that “connecting clusters, networks and ecosystems is a priority” and the role of governments is to create the framework conditions. They pointed out the importance of triple-helixes which allow for cooperation within and across the chemical value chain.

The focus of the discussion, that followed the keynote speeches, has been on how to implement the strategy and what kind of support is needed to make this strategy work on the ground. The speakers agreed that the success of the cross-border strategy would be determined by the setup of trilateral projects, representing concrete implementation of the set vision on paper. Dr Hartmut Klusik (Bayer) stated that innovation should develop from science knowledge to useful products (example: plastics). Discussing societal innovation, he asked for a more science-based approach in the EU legislation, and in his opinion the EU Industrial policy strategy should be based on the innovation principle (e.g. Biothech and genome editing).

Mr. Bert Kip (Brightlands Chemelot Campus) stated that the important point is the reduction of energy costs.
The human factor then, is another central aspect: “We need to bring people together.
We need to create joint ambitions and trust among partners, with a bottom up approach”. This is the way to overcome the so called “Valley of death”.

Mr. Gregor Hetzke (Evonik) focused on the aspect of infrastructure: “We need to invest into connections, railway, waterway, etc.” And while these investments can come from the private sector, he stated that the role of the government is to coordinate the infrastructure projects in cross-border regions, so as these projects are complimentary. Wouter De Geest stressed that the implementation of the trilateral strategy is possible with “small, but successful steps” and “we should come with projects”.

The Head of Chemicals Unit in the Commission, Mrs. Luisa Prista, stated that we are in a new industrial age which is not only technology driven. The model is changing into an ecosystem, involving the society, while the change in the perception of waste and CO2 as a new resource is already gaining momentum. . However, she also stated the need for a holistic approach, and more innovation for CO2 initiatives. In this light she stated that the Commission is putting an industrial strategy that is based on sustainability, circular economy, and resource efficiency. “We have new projects that should be linked together”. She concluded that the role of the Commission for the future success of the trilateral strategy is to put leverage for compelling projects rather than to invest by itself.

ECRN Executive Board members meet in Brussels for strategic discussions