ECRN Executive Board meeting and General Assembly in Potsdam 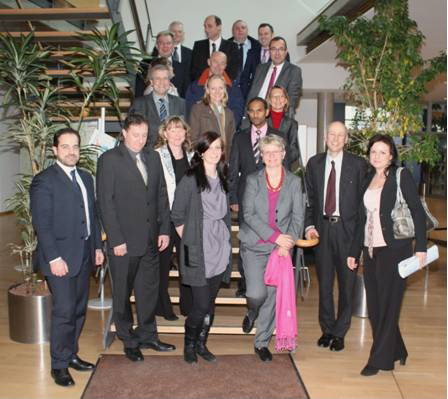 The ECRN General Assembly was held in Potsdam on 1 March 2012, hosted by ECRN member region Brandenburg. The meeting was preceded by an Executive Board meeting and a Networking Dinner with members of ECRN and representatives from the chemical industry, associations and research institutes.

In addition to the statutory meetings, approval of the ECRN Action Plan for 2012 and discussion about the strategic priorities of the network, the participants got a chance to visit and learn more about the activities of two research institutes, Fraunhofer (Golm) and Helmholtz-Zentrum Geesthacht (Centre for Biomaterial Development/Institute of Polymer Research). Interesting exchange of experiences took place also during a Networking Dinner, where different chemical stakeholders had a chance to discuss their common interests and possibilities for collaboration over dinner.

Moreover, an important initiative shaping the ECRN agenda over 2012 was presented to the members. The European Commission (DG Enterprise and Industry) has launched a study titled “Analysis of policies in chemical regions to support the competitiveness of the chemicals industry”. The study seeks to provide a comparative analysis of relevant data and policies in regions with a strong presence of chemical industries and it covers 26 regions (all ECRN member regions are included). While the execution of the study has been commissioned to a consultant, ECRN is actively engaged in the process – the member regions provide valuable input for the study and the network oversees the progress of the work by participating in the project steering group and supporting the consultant in their work. The project is carried out during 2012 and a final report is expected by the end of the year.