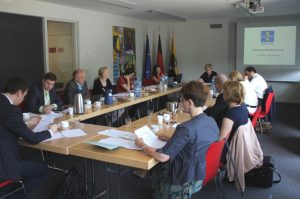 The second Permanent Working Group meeting of 2014 was held on 20-21 May. Representatives from member regions gathered once again to Brussels for two days of intense work to plan and prepare upcoming activities for the latter half of 2014 and beyond. Cooperation and joint activities played a prominent role in the discussions, and several good examples were shared by the members. For instance, Flanders and NRW held a joint economic conference in March and plans have been made to extend the collaboration next spring by organizing an interregional chemical summit and the ECRN General Assembly in NRW next spring. Preparations were made for the EU-Jiangsu Cluster Forum that takes place in Brussels in June 2014 and plans were outlined also for the 12th ECRN Congress (21-22 October 2014) in Usti, Czech Republic and other events in 2014 and 2015. The outcomes and plans for next steps after the ECRN Project Council launch in April 2014 were also discussed. Overall, we have several interesting events and initiatives lined up for the next months, so stay tuned for new updates!